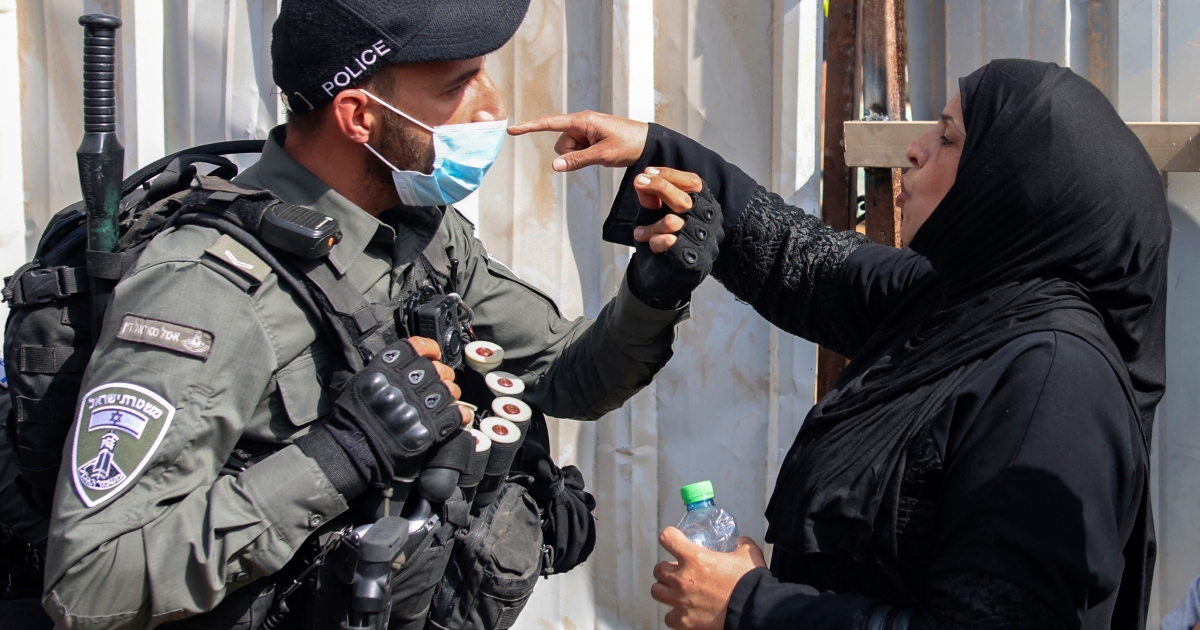 SAMAH DWEIK
PALESTINIANS VOW TO DEFEND GRAVES IN JERUSALEM CEMETERY
Palestinians have been protesting against Israeli excavations in a Muslim cemetery in Jerusalem to build a national park.
Over the past few weeks, videos and images of Palestinians clinging to their family members’ graves as Israeli forces arrest, beat, and attempt to forcibly pull them away have widely circulated on social media.
Israeli occupation authorities in Jerusalem have been moving ahead with plans to build a Jewish “national park” set to open in mid-2022 over parts of the cemetery, which spans more than 14 dunams (1.4 hectares) of land.
Three weeks ago, workers from the Israeli-controlled Jerusalem municipality and the Israel Nature and Parks Authority exposed human remains during excavations, causing outrage and unleashing continuous protests and prayers at the site.
Since then, Palestinians have been increasing their presence at the graveyard, including those going to protect their dead, and confronting Israeli forces, which responded with tear gas, stun grenades, physical beatings, arrests, temporary bans on individuals from visiting the cemetery.
At least three Palestinians were wounded and seven detained on Friday following Muslim prayers at the site, in addition to dozens of others over the past few weeks.
A hearing is expected to take place at the Israeli Jerusalem District Court next week for a second petition submitted by Palestinian lawyers based in Jerusalem against the ongoing excavations.
Omar Rashadeh, 18, is one of the Palestinians who was arrested by Israeli forces at the cemetery on October 25.
“I pray the Fajr [dawn] prayers, and then come to the cemetery to protect my grandfather’s grave and the graves of the Muslim dead”, Rashadeh told Al Jazeera. “Occupation forces assaulted me with heavy beating during my arrest while I was present to protect my grandfather’s grave”.
After his arrest, Israeli forces took Rashadeh for interrogation, before releasing him the same day and slapping him with a temporary ban from the site.
“Despite being banned from the cemetery, I come every day. I will remain here night and day to defend the grave of my grandfather, who died last year and who was compassionate to me for 17 years”, he continued.
The Al-Yousufiya Cemetery is one of the Palestinian and Muslim landmarks in occupied East Jerusalem. It dates back to the Ayyubid period, when its construction was ordered by Muslim leader Salah al-Din al-Ayyubi, also known as Yousif bin Ayyub bin Shahdan, and after whom the cemetery is named.

Demolishing graves
An extension of the cemetery sits on the eastern side, and is known separately as the Cemetery of the Martyrs, where excavations are currently being conducted. It was named after the Jordanian, Iraqi and Palestinian fighters who were killed in Jerusalem while defending it against Israeli forces during the 1967 war.
Shortly after Israel’s occupation of East Jerusalem, the West Bank and Gaza in 1967, the Jerusalem municipality seized the land upon which the cemetery sits.
Over the past decade, occupation authorities have taken steps to change the characteristics of the site. In 2004, they issued an order to demolish a number of graves and banned any maintenance work.
Ten years later, authorities prevented the digging of new graves and blocked Jerusalemites from burying their dead there, while demolishing a number of graves belonging to Jordanians.
In December 2020, Israel’s Jerusalem municipality, accompanied by settlers, began to implement the park project, and demolished one of the walls lining the cemetery, as well as several sets of archaeological stairs in the site.
Mustafa Abu Zahra, head of the Committee for the Preservation of Islamic Cemeteries in Jerusalem, told Al Jazeera the Israeli occupation’s municipality and the Nature and Parks Authority “intend to destroy the landmarks surrounding the Al-Aqsa Mosque”.
He said the graves in the Al-Yousifiya Cemetery belong to the Palestinian Jerusalemite families of Bakarat, Nababta, Bashir and Rashadeh families, among others.
Abu Zahra explained the ones conducting the excavation and bulldozing work on the ground are the settlers from the Nature and Parks Authority and are armed.

Judaising Islamic landmarks
The committee head said the excavations in Al-Yousufiya are part of Israeli policy targeting Islamic sites in Jerusalem.
“Attacks on Islamic cemeteries in Jerusalem began since the occupation of the city [in 1967], with the aim of destroying and Judaising Arab and Islamic landmarks”, said Abu Zahra.
He pointed to several Palestinian cemeteries with such policies, including the Ma’man Allah Cemetery – one of the oldest in the city.
The cemetery and the corresponding area it lies in were renamed “Mamilla”, while parts of it were razed to build a public park as well as an Israeli museum.
Abu Zahra said in the cemeteries of Palestinian villages that were ethnically cleansed in 1948, “there are only a few graves left” such as in the villages of Yalu and Imwas, on the outskirts of Ramla, upon which Israel built “Canada Park”.
Similarly, in what is now known as West Jerusalem, only a few graves remain in the ethnically cleansed villages of Malha and Deir Yassin.
“These graves still bear witness to the crime”, said Abu Zahra.
Back at the Al-Yousufiya Cemetery, Rushdeh recalled how his late grandfather would keep him warm during winter.
“When I would shake his hand, he would feel how cold my hands were, and he would hold them in his until they warmed up. Today, I come to warm his grave with my presence”, he said.
Ola Nababta, one of the women filmed last week clinging onto her son’s grave as Israeli forces attempted to excavate around it, said she used to come to the cemetery twice a week to pray for her son, Alaa.
“Over my dead body will they dig up my son’s grave”, Nababta told Al Jazeera, explaining how she was beaten.
Nababta said her two other sons, Bahaa and Ihab, are buried at the Bab al-Rahma Cemetery, where Israeli authorities have also dug up graves and where they now prohibit burial.
“The Yousufiya Cemetery and the Cemetery of the Martyrs are a burial ground for all Jerusalemite families”, said Nababta.
“Israel is chasing Jerusalemites, alive and dead, to erase their presence in their city, and to control and judaise the city”.
(Fonte: Al-Jazeera, 31 ottobre 2021)